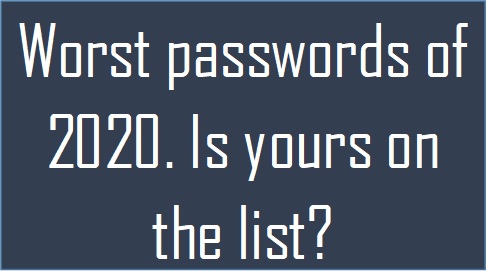 Yes, even with passwords, old habits die hard. Almost four decades since the advent of the internet, you’ll be surprised that people still choose convenience over security.

NordPass has published a list of the top 200 most common passwords of the year 2020. You can skip right to the table first. Going back to the 2015 list, the worst passwords still commonly included 123456 and password. Fast-forward five years later, and these examples are still very much in use. Such passwords do nothing to deter a hacker from taking control of your email account.

First, check if your password is on the list, then see an overview of passwords you should avoid based on our analysis of what made it to this years’ list. We will then discuss what you can do to strengthen your password. This list shows the number of users using the password, how long it would take an attacker to crack, and the number of times it has been exposed.

1. Passwords: What You Should Avoid

From the list, it is clear that as a general rule, you should avoid using: –

2. Words found in the dictionary.

3. Common names of people. For instance, michael and ashley.

5. Pet names (terms of endearment) such as sunshine and princess.

6. Passwords generated from characters that are adjacent to each other on the keyboard such as qwerty. 1qaz2wsx seems like a complex password, but it is actually a cluster of keys on the left-hand side of the keyboard.

8. Another interesting thing to note from this list is that all passwords appearing on this list lack a special character.

Passwords with the characteristics described above are the most vulnerable. The majority would take less than a second to decipher using either dictionary attacks, brute-force attacks, or simple human guesswork.

Email compromise is on the rise every day with hackers armed with new, advanced, and more sophisticated techniques to penetrate systems via email. As such, the importance of having a strong password as the first step cannot be overstated.

If you have any of the above passwords, we would definitely recommend changing it. However, if you do not necessarily want to discard your password altogether, consider ways to strengthen it by doing the following:

1. First, strengthen your password by adding a combination with upper and lower case letters.

3. Third, make your password longer – preferably over 10 characters. And no, even though it has 10 characters, 1234567890 doesn’t qualify. In addition to being long, your password should have a combination of numbers, letters, symbols.

If your email account has already been hacked, read our guide on what to do if your email has been compromised. While vendors need to be reminded that allowing users to create easy and simple passwords on their platforms does nothing to protect the privacy and security of users, it is also up to us to take responsibility for our own accounts. See more tips on how to create stronger passwords.

What Does Email Spam and Spam Filtering Mean for Businesses?
The Role of Employees in Your Fight Against Spam
Why Microsoft's Exchange Online Protection (EOP) is Not Enough
Scammer Extorts Site Owners Using Threats
Two-factor (2FA) Authentication: Why You Should Use It
FBI Warns of Egregor Ransomware Targeting Organizations World Over
Post Views: 1,124
Tags: bad passwords, email security, weak passwords

You don’t need to change your password regularly or frequently

8 Reasons Why You Should Outsource Your Spam Filtering